Here you can find the most important Infos at a glance

The High Scardus Trail is breathtaking. Breathtaking because the mountain landscape is simply phenomenally beautiful. But also because you are on many stages on paths that are anything but well-traveled. Especially on the stages in Kosovo there are always more or less long pathless passages or at least long stretches on very narrow paths. This requires not only sufficient experience in hiking in pathless terrain, but also in orientation. In this respect, the High Scardus Trail is a dream destination - but despite moderate technical difficulties only for experienced alpine long-distance hikers who can also find their way in the lonely mountains up to sea levels of almost 2,800 m, have experience in how to behave in bad weather and can assess themselves well in the points listed below regarding the technical and physical demands. 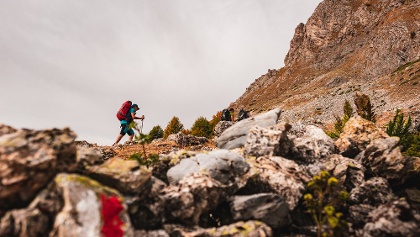 The High Scardus Trail is breathtaking. Anyways there are some very important requirements which have to be fulfilled to ...

You will need alpine hiking equipment for the High Scardus Trail. The equipment list given here lists the minimum equipment needed for this trip. You can or should of course add items that you personally need for the trip or that you have had good experiences with (e.g. medications, special sun protection, larger water bottle, etc.). You will mostly hike at altitudes between 500m and 2,800m - this should be taken into account when choosing your hiking equipment (especially your clothing). 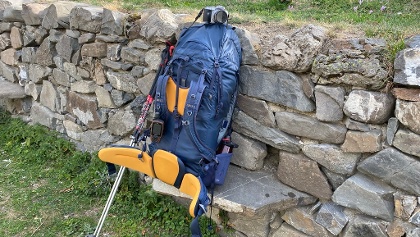 The High Scardus Trail is an extraordinary and beautiful Trail in the Balkan Mountains. Despite his beauty you should ...

The linguistic diversity along the High Scardus Trail is as high as the cultural diversity: along the trail you constantly change back and forth between areas with Macedonian, Albanian and also Serbian language. In the Dragash area around Brod and Restelice, "Goranski", a transitional dialect between the Torlak dialects of Serbian, Bulgarian and the northern dialects of Macedonian, is spoken due to the Gorans living there.

In general, the language spoken in the mountain villages does not necessarily adhere to national borders: for example, in the North Macedonian mountain villages of Veshala, Bozovce and Vejce, Albanian is spoken predominantly due to the Albanian minority living there, while in the southern Macedonian village of Brezovica, Serbian is mostly spoken. For most hikers who are not from the Western Balkans, this is very interesting - but for communication on the trail, this will be mostly irrelevant, since hardly anyone will be able to speak one of the languages mentioned. With English you will get along well in the cities like Prizren or Ohrid (and of course also in the bigger hotels on the trail) - but in the mountain villages and the small guesthouses you will rather communicate with hands and feet. Never mind: people in the Western Balkans are usually extremely friendly, helpful and very good at understanding "whole-body" questions. Nevertheless, they should not be too complicated, or in case of emergency someone in the village will be looked for who knows English or even German.

If this is too exhausting for you or if you want to learn more about the country, the people and the culture, we recommend, also because of the language barriers, to book a tour with a local guide through this website. This may mean a little less adventure (but still more than it is offered on most other European long-distance trails), but significantly more relaxation, knowledge and also safety in case of emergency.

Explorer Tours are special designed exploratory trips that open up a unique experience with profound insights into the ...

How to get there

Of course, how you get there will be determined by where you live (and therefore how far you have to travel to the High Scardus Trail) and by your time budget.
How to get there

Of course, how you get there will be determined by where you live (and therefore how far you have to travel to the High ...

- Before mid-June, stubborn snowfields can make accessibility and orientation difficult or impossible. Exceptions to this are stages 16-19 in the Jablanica Mountains and stages 20 & 22 in the Galichica National Park, which are at a slightly lower altitude and are therefore usually possible from the beginning of June.

- July and August are usually very hot and dry: temperatures of 40°C in the surrounding towns like Ohrid and Prizren are not uncommon during these months. In the high mountains along the High Scardus Trail it is much more pleasant, but temperatures can still be very hot for enjoyable hiking. If you want to be on the High Scardus Trail during this time, it is recommended to start the stage as early as possible in the morning when temperatures are still pleasant. But be careful: depending on the weather conditions, it can be so cold during these months that you will be glad to have a hat and a down jacket with you.

- Second half of June as well as September to mid-October: Often a very pleasant time to hike the High Scardus Trail, as temperatures are often comfortable for hiking. However, the risk of bad weather is somewhat higher, so care must be taken to have enough warm clothing (hat, insulating jacket) in your backpack. In October, for some long stages, attention must be paid to the shorter days and therefore an early start in the morning. It should be noted that some alpine pastures (without advance booking) are only managed from the end of June to mid-September. In addition to these times, you will not meet a soul on the alpine pastures (at least without advance notice).

- After mid-October, the onset of winter can bring fresh snow to the high mountains and make it impossible to access them.

- In winter and spring, the entire High Scardus Trail is under a massive blanket of snow, making it impossible to hike the High Scardus Trail during this time. But this winter wonderland is a fantastic insider tip for ski tours (see also menu item "Other activities")!